A lot has been written about how Apple’s new MacBook Pro maxes out at 16GB of RAM. Some argue that 16GB is enough for almost anyone, and therefore it is not a real problem. I disagree.

Back when I bought my 2012 MacBook Pro Retina, I maxed out its memory and got 16GB RAM. This was a huge extravagance and at the time. It was hard to use more than 8-10GB of RAM. However, as the years passed, the macOS has used more resources and so has Xcode. Now, almost 5 years later, my machine fully utilizes that 16GB of RAM. 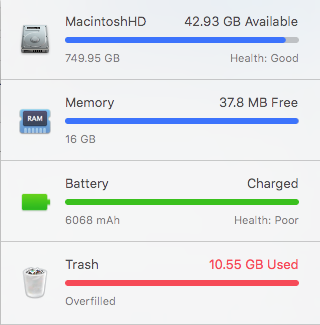 Given what these new machines cost, I expect to be using it for several years. I anticipate that 2-3 years from now, 16GB RAM is going to feel very cramped. At that point, the only option will be a new machine.

I’m torn. My current MacBook Pro Retina is the best Apple laptop I’ve ever owned. I like it a lot. I really want to move to a retina (5K) external monitor except that my current machine’s Thunderbolt 1 ports are unable to do this. The new MacBook Pro solves this problem, but the memory issue gives me pause. I may just have the battery replaced and sit on my hands for another year to see what happens.