Here is an updated version of the Script Debugger 6 (build 6A162) release notes. We are very close to completion and this document quite accurately reflects the new features in Script Debugger 6.

DISCLAIMER: Nothing is final until the software ships and there is always the possibility that a feature may have to be removed or altered in the final product.

Script Debugger 6 adopts an always-on approach to code signing. Once you enable code signing for a script by selecting a developer ID, Script Debugger signs your script each time you save it. There is no requirement to go through a special Save or Export operation. 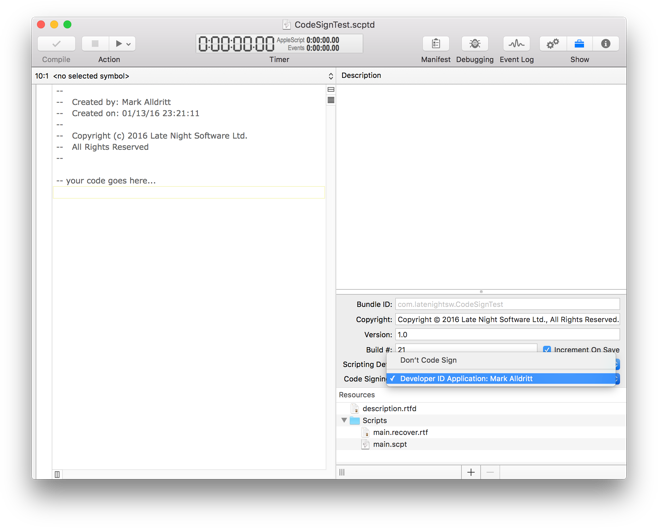 Additionally, you are able to identify a Scripting Definition (SDEF) file from your script’s bundle and to select a developer ID to enable always-on code signing for your script. 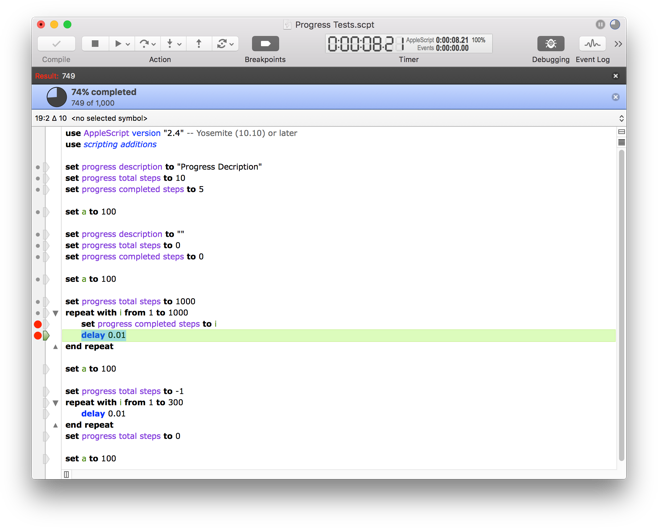 Note also that progress information is shown in the window title bar and the script’s document tab. You can elect to dismiss the progress display by clicking the ‘x’ button.

The Open Quickly command, which allows you to easily search for and open scripts containing a particular term in the name or the body of the script, has been heavily revised for Script Debugger 6.

The Open Quickly window highlights the portion of the script’s name, description, Finder comment or script source that matches the search term(s) entered. 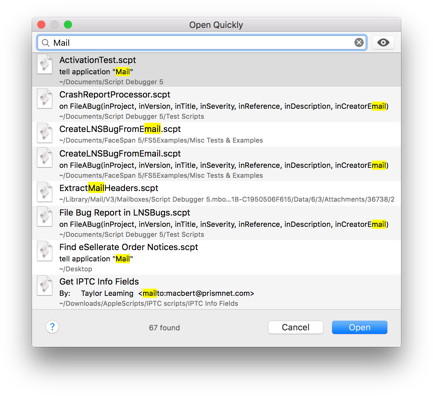 For example, if you have a series of scripts containing the same ‘writeToFile’ handler, you can locate these scripts by entering the search terms ‘write’, ‘writeToFile’ or ‘writeFile’. 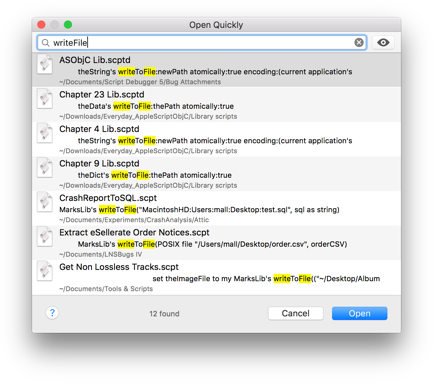 Script Debugger 6 at long last provides code folding where you can collapse block structures and comments within your code to reduce clutter when editing. 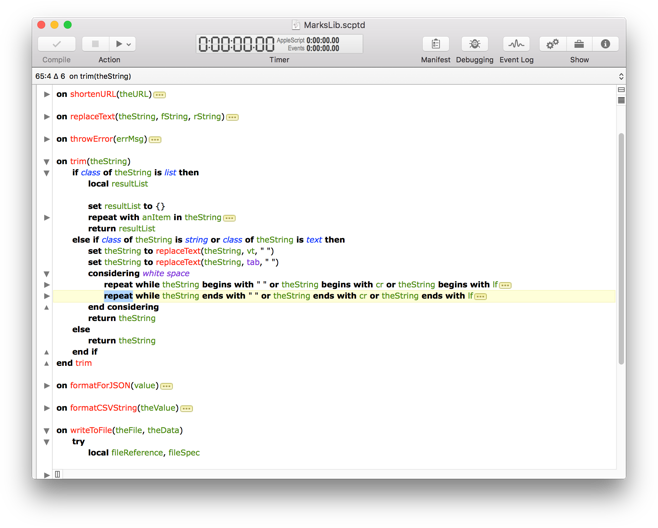 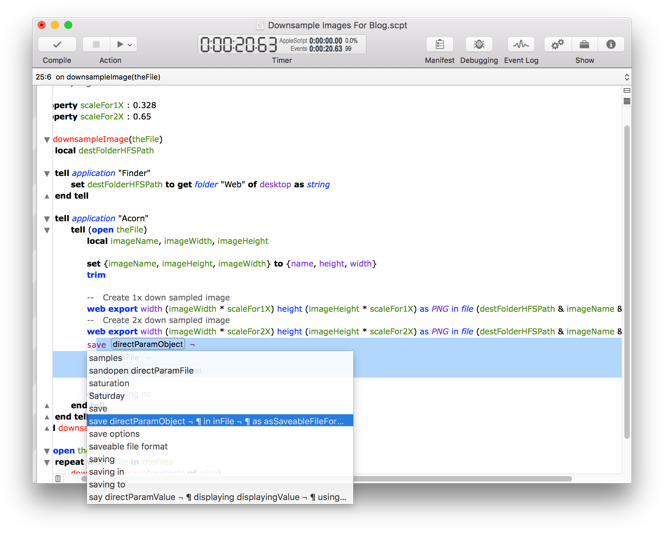 AppleScriptObjC code completion covers the main Cocoa frameworks, and automatically handles insertion of current application's where required. The insertion can be either in-line, or in the form of automatically generated properties, with the ability to refactor between the two forms.

When using interleaved syntax for handlers, parameters will be escaped with pipe characters if they clash with defined terminology.

Script Debugger 6 performs each script compilation in a new AppleScript compiler instance. This avoids a long standing problem where it was impossible to change the case of a variable, property, handler or script object once the script had been compiled.

If you have Dash installed, you can turn on support so that option-clicking on a word will look it up in Dash. See … in Preferences. 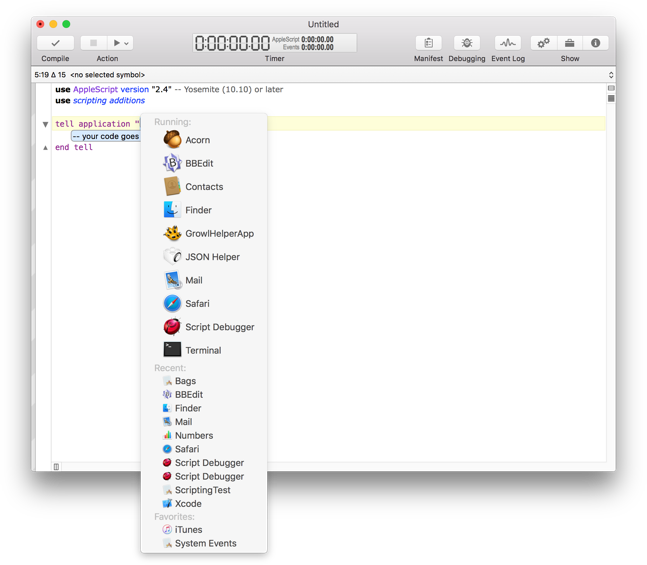 A new Persistent Global Variables command has been added to the Script menu which allows you to determine if the value of global variables and properties persists from one run to the next. Note that when Code Signing is enabled, this setting is forced off to match the behaviour of signed scripts. 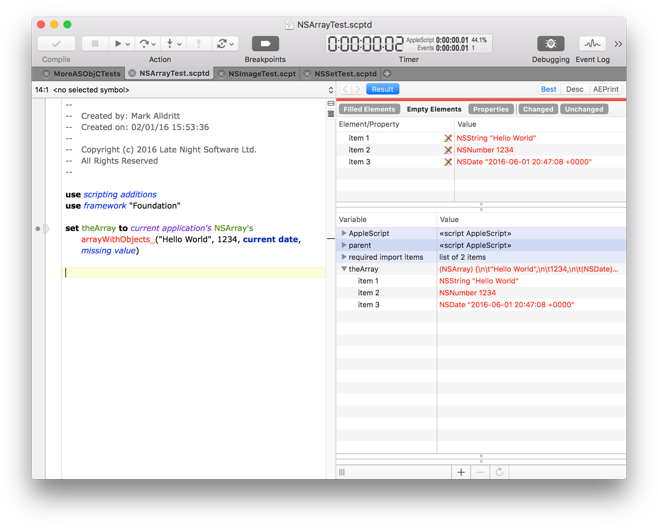 As this screen shot illustrates, you are even able to explore into container objects to examine their contents. 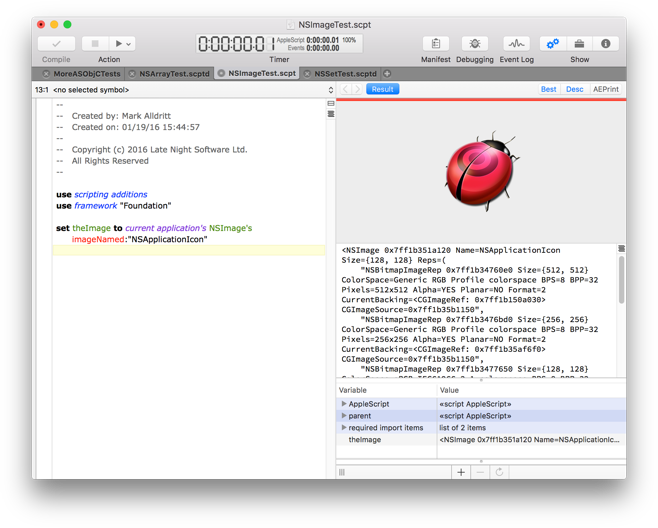 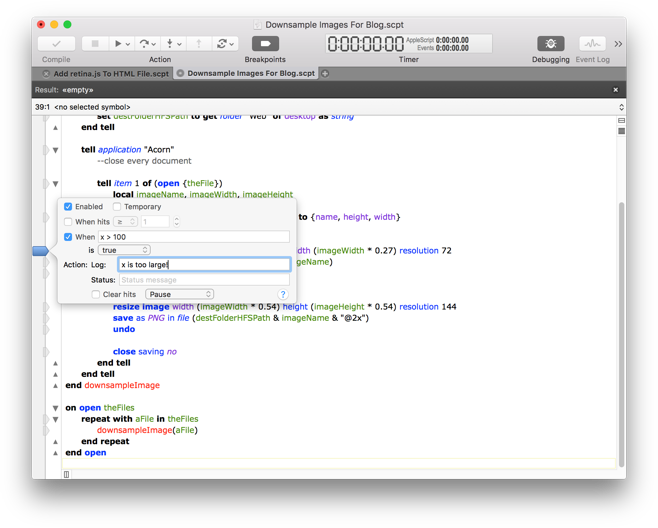 The Remove All Breakpoints command now confirms with you before removing all your breakpoints to avoid accidental breakpoint removal.

Added a Clear and a Close button to the Event Log bar within the script window.

When the PrefChooseAppsUsingChooser expert preference is true, the dictionary chooser presented by Script Debugger when opening dictionaries lists scripting additions and script libraries just as the Script Editor does.