Back in May 2009 I made the difficult decision to abandon FaceSpan 5. This was a wrenching period in my life and it has taken a long time to recover. The failure of this project seriously stressed my relationship with a couple of good friends and cost me a lot of money and time. At last I feel like I have enough distance to begin to talk about what was accomplished and the mistakes I made.

I am a self-funded Indie (lone) developer. I made a number of classic business blunders on the FaceSpan 5 project. I broke the golden rule: never (never!) rewrite a software product. I massively underestimated the effort required to complete the product. I set off without having sufficient resources to complete the project. Because I took so long to complete my work, the market moved on — AppleScript’s importance to the customers I intended to target declined. Some may argue that the market was never really there to provide a return for a product of this complexity. Finally, I didn’t pull the plug soon enough. Hindsight its great.

Not all was lost. Some of the code I developed for FaceSpan 5 found a home in Script Debugger 5.

Many years previously I developed FaceSpan 3 under contract for its owner. As part of that effort I became impressed with FaceSpan’s power and simplicity. FaceSpan 3 was successful, for a development tool, and even received an Apple Design Award at that year’s Worldwide Developers Conference. Sadly, after my involvement with the product ended, FaceSpan fell into disrepair and did not make the leap to Mac OS X. FaceSpan’s developer finally produced FaceSpan 4 which was to little to late and not as successful as hoped for.

I acquired FaceSpan 4 in 2006 and, after a period where I tried to fix the most serious issues with the product, I concluded that FaceSpan 4’s dependance on AppleScript Studio was its core problem. FaceSpan 4 had great integration of a visual UI bilder and coder editor, but lacked a good runtime environment and debugging.

Work on FaceSpan 5 began in 2007 with the aim of freeing FaceSpan from AppleScript Studio and restoring the classic FaceSpan’s attractiveness. By the time I stopped FaceSpan’s development I believe I was well on my way to achieving my aims. Two great Mac developers helped me with the project:

The project turned out to be too ambitious given my resources. Additionally, FaceSpan revealed a number of AppleScript issues and problems in Apple’s Cocoa Scripting framework which I was ultimately unable to overcome.

FaceSpan 5 was an integrate tool for building Cocoa applications using AppleScript. Many people saw similarities to Apple’s HyperCard. FaceSpan provided a visual UI builder, an AppleScript editor, an AppleScript debugger and a runtime environment designed to take the best advantage of AppleScript’s strengths and provide a collection services and UI widgets out of which applications can be built. Matt wrote this description of FaceSpan 5 back when the project was active. 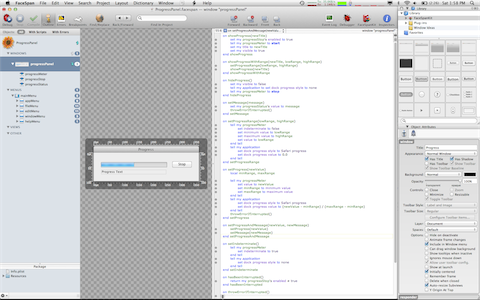 Since FaceSpan 5 was abandoned there have been several developments in the area of AppleScript GUI tools. Firstly, Apple transitioned from AppleScript Studio to AppleScriptObjC. Shane Stanley has released his ASObjC Runner which can display progress dialogs. And then there is the long lived Appearance OSAX from 24U Software.

When I stopped developing FaceSpan 5, a lot of people came out of the woodwork looking for a copy of the software. I was not willing to make the software available at that time, but I am now. I’m doing this now because I think it might be interesting for those of you who were/are curious about what I was working on to get a chance to play with the product.

Keep in mind that this build predates the release of Xcode 4 and there are some interesting similarities. Apple had to be developing parts of Xcode 4 during the same period so its fascinating to me how common ideas arrise in different places.

Before you download the software, please keep the following conditions in mind:

I have withdrawn the FaceSpab 5 download as Mac OS X 10.9 (Yosemite) broke it – apologies