Now that Script Debugger 5 has been released, and most of the fires have been put out, I am turning my attention to new projects. As part of this I have been doing a lot of reading and experimenting with Android and iOS development. I realize I’m late to the party with iOS/Android development, but Mac OS work has kept my busy.

I finally decided to get my feet out of the mud and build something useful. I chose as my first significant iPhone app a client for the Victoria Virtual Tennis Club. This is a PHP/MySQL based web site which I developed to help this organization host Tennis matches in the Victoria B.C. area.

Like most desktop developers moving to mobile, I’m struggling to keep things simple on iOS and adopt the UI idioms users have come to expect and understand. I’m sure I’ll find ways to simply this app after I’ve had time to play with it.

This is a standard master-detail app which lists a calendar of upcoming VVTC events: 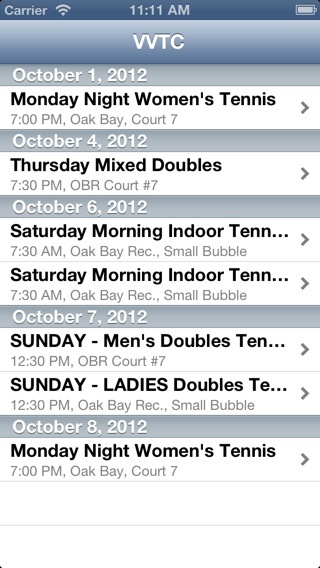 Taping on an event in the master screen takes you to a detail screen where you can see event details, a list of participants and then sign up for the event if you want to.

Behind the scenes, this involved adding a simple REST service to the VVTC web site to get the current calendar information, and to request signup. This data is returned as a JSON structure.

I decided to avoid the various iOS REST frameworks I found, and simply roll my own since I only have two URLs (get calendar, request signup). This decision may haunt me in the future, but for now things are working and I can understand what’s going on. The new NSJSONSerialization class worked flawlessly with the data returned by PHP’s json_encode function. Dealing with dates was a bit of an issue, but I finally settled on the ISO 6801 date format and that problem was solved.

Going forward, I want to add a Month view that mimics Apple’s Calendar application using the Kal project as an alternative to the list view I currently have.

I want to give full credit to the following resources that made this whole exercise possible within the 2 days I gave myself:

UPDATE: I am missing Cocoa Bindings under iOS. I know that iOS provides Key Value Observing, but Bindings are missing. How are others dealing with this omission?